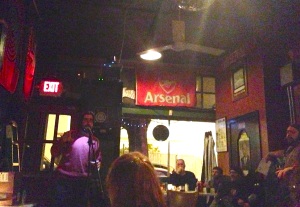 Portland could have found a seedier bar for their inaugural Noir at the Bar, a literary event that’s been happening in cities all over the country since 2008.  I was kind of hoping to settle into a night of readings by noir writers inside the sad, sketchy misery of The Matador on W. Burnside.  Instead, it was at Beulahland where I used to get coffee and write almost a dozen years ago when I lived a couple blocks away.

Beulahland was one of the first new businesses that went in on a street that once housed a crappy Chinese restaurant, a shop that sold flavored popcorn and an Eckankar office.  That was when the grocery store around the corner wasn’t a Whole Foods but the Food-Valu with their stack of wilted lettuce and their bin of discount meat. That was the corner where my best friend got beaten up for being gay.

That old neighborhood would have been the perfect place for the reading. Now the area is full of fancy restaurants, boutiques and hipster bars.  In this gentrified context, stepping into Beulahland for the first time after so many years, felt like walking into a place that had always been there, comfortable and welcoming.

I got a beer and sat down with some old friends, one of which I hadn’t seen for at least a decade. They told me how they’re submitting and publishing and working daily with their words. I explained my relief at finding that these blog posts have mostly been enough, that sitting alone, struggling with stories, no longer holds my attention the way it once did.

And then the lights were turned off and my beer became a buzz. I don’t read much noir fiction but for the moment I was happy to sink into the stuff of violence and intrigue. I absorbed the clever, horrifying and hilarious stories that, thankfully, all these other people are still interested in telling.

4 thoughts on “week ten: noir at the bar”