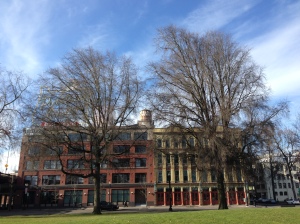 I’ve lived in Portland for over twenty years and feel deeply rooted here.  My sense of history about this place, however, is also only twenty years old and looks mostly like a brief series of before and after photos. Before: the struggling art galleries, auto repair shops and empty fields west of Old Town, scented by the yeast of the Weinhard Brewery. After: the Pearl District lined with high-end condos and specialty boutiques. Before: a handful of poets crowded into Cafe Lena for a reading. After: Dozens of reading series, small presses and literary events in every corner of the city. Before: protests in a downtown park in support of the Earth Liberation Front. After: protests in a downtown park against the 1%.

This week, I decided to expand that extremely limited sense of history by trying out the PDX Social History Guide mobile app provided by a very cool organization called Know Your City. While the navigation of both the app and the full site is pretty clunky, it was really fun to walk the city on a brisk winter day and learn some interesting facts about places I’ve passed hundreds of times and a city I’ve been a citizen of for two decades. 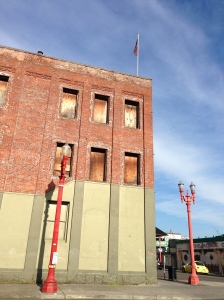 Among the most interesting tidbits:

One of the best things about taking this tour was the excuse it gave me to wander slowly through the city, to look up, take pictures and not care that I looked like a dumb-witted tourist. I’ve only just scratched the surface of all the history lessons I still need, but I see how if you move a little slower and look a little longer, the city unfolds in a whole new way.