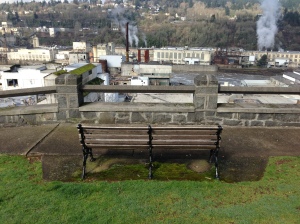 Maybe you’ll laugh. I know I did. On a beautiful mid-week morning, I got in my car and headed south down 99E to Oregon City just to ride our country’s only outdoor municipal elevator. Kind of a ridiculous thing to do since it’s just an elevator. It’s just another small Oregon town. Why bother, right? Then again, why not? I’d never stopped in Oregon City before and it was gorgeous and sunny and simply being in a new landscape is almost always rewarding.

As I made my way out of the charming Sellwood neighborhood, I entered a long stretch of strip malls. At each stoplight, with each additional mile of commercial monotony, I felt a little more drained. The sun stopped having the same exhilarating effect. The fun of a short, random road trip started to feel like a chore. And this is why, when I turned off toward Oregon City, toward Willamette Falls, the closed Blue Heron paper mill and the municipal elevator, my trip felt a little less ridiculous. Here was a bend of river, a gathering of old buildings and homes, plumes of smoke and stretches of green that I’d never seen before. Even though Oregon City isn’t so different from all sorts of other small towns, my bones buzzed a little with the newness. My brain grew half a shade brighter.

Parked at the top of a bluff, I found the space-age pod that marks the top of the elevator, but first decided to walk along the McLoughlin Promenade. This narrow but lovely strip of greenery, stone work and benches runs the length of the bluff, high above the Willamette River.  At one end, you can cross a narrow bridge that hovers over the highway to get a better view of Willamette Falls.  The river was very high and the falls were less dramatic because of it, but it was still an impressive rush of water flowing under perfect, puffy clouds. I’d never seen it before so it was brilliant.

The elevator was also charming in its own way. The floor of the observation deck was painted with a map of Oregon City streets and a history of the town was displayed in a series of lenticular photos.  In 1845 it became the first incorporated city west of the Rockies. There was some lumber mill history and some history about the first elevator built on the spot in 1915. I didn’t know any of it and now I do. Thanks municipal elevator!

As is my fashion, I took the trip backwards, riding down instead of up. An elderly woman ran the elevator from behind a plastic barrier, ticking off the number of passengers in a school notebook while browsing a lightbulb catalog. After walking a few blocks through the lower section of town, I took the steps back up the side of the bluff. I’m guessing the various paths and staircases put in place in the late 1800’s and early 1900’s were steeper and less stable. Climbing the pretty stone steps that are in place there now didn’t create an overwhelming longing for a municipal elevator. But I’m glad it’s there, rising as a quirky antidote to commercial sprawl and a destination point for silly road trips. 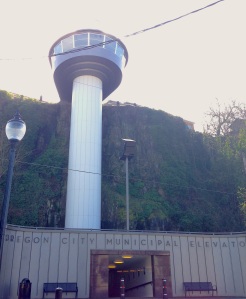