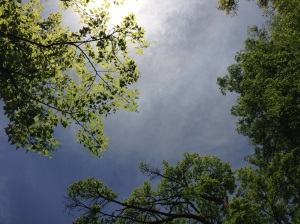 Sometimes the new thing is barely visible inside the old thing.

It wasn’t new that I got a massage this week, but it was an Ashiatsu massage, a technique I’d never tried before. In this form, the therapist uses their bare feet instead of their hands to release tight muscles. I don’t think I’ve ever had someone stand on my low back before or knead my paraspinals with their toes. So there’s that.

It wasn’t new that I spent my day off this week lying in the grass of Laurelhurst park surrounded by half-naked people doing handstands, playing guitar and reading books. I’m pretty sure, however, that it was the first time I’d done this on May 1st with a record-breaking temperature of 87 degrees. The leaves above me were still new, still in the early flush of bright green. All I could do was feel the grass against my legs and stare up at the sky for hours. 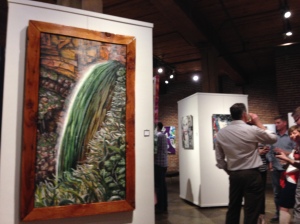 It wasn’t new that I went to First Thursday where most of Portland’s art galleries open their new shows to throngs of wine-sipping people. I used to go to this event on a regular basis when I first moved here, but as the Pearl district developed, high-end condos and boutiques replacing scrappy little galleries and auto-body shops, I’ve gone less and less.  Visiting the Pearl now feels like visiting another city, maybe one in California. There are so many more people crammed into this area now and so many of them are dressed in expensive clothes and tipsy on expensive booze and are, maybe, interested in the art, if they’re interested at all, in a different way than me and my ragtag group of artsy-fartsy friends ever were.

Sometimes the new thing is standing in the place of the old thing that’s now obliterated – the gallery where a friend married, the sketchy coffee shop where another friend first hung a show, the train tracks and fields I rambled across the first time I set foot in this city. Gone and gone and gone. In their place, nothing but one new thing after another. 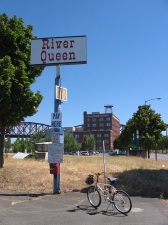