The last time I was in a good, swimmable lake was so long ago, the only photos I have of it are printed out and pasted into a photo album. That was a lake near Bar Harbor, ME in 2000.  There was one float across a seaweed choked pond just off I-84 near Multnomah Falls several years back, but I don’t count that one. It kind of sucked.

I almost didn’t go to Trillium Lake this week because I knew it would be crowded with children and dogs. But I decided to go camping by myself, something I’ve never done, and thought being within spitting distance of a bunch of families would be a safe, easy bet for a quick one-night escape.

Trillium Lake, just 90 minutes outside of Portland near Government Camp, was indeed crowded with children and dogs. But the lake, oh the lake, it was calm and warm and guarded by the majestic slopes of Mt. Hood. I waded and floated and swam amongst the canoes and kayaks, the innertubes and paddleboards. The reeds along the shore were full of dragonflies. The sky was full of hawks.

At sunset, I did the easy 2 mile loop around the lake and was the only one on the path. Every curve presented a perfect new landscape and because I was alone, I stopped constantly to take photos and watch the sun dapple and breath in the end-of-day air. It was magnificent. 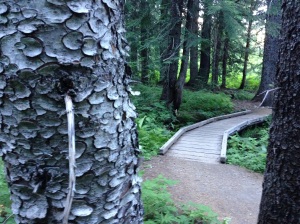 The beauty of the lake totally made up for the fact that the actual camping portion of my trip was full of dorky failures. I brought no light to read by. My air mattress completely deflated three separate times during the night. In the morning, the fire-making skills I brought the night before failed me and I couldn’t get the damn thing going which meant I couldn’t heat up a pot of water for coffee. It took over an hour of me burning paper and sticks to get the water boiling and when I was ready to finally drink that hard-earned cup of coffee, I realized I hadn’t brought a cup. Dork and dork and dork.