The Enchanted Forest theme park sits on an oddly tantalizing perch visible from I-5 just south of Salem. Every time I was on that stretch of highway, I’d see the fake tudor buildings peeking out of the woods and promise myself that someday I’d go. So what if I didn’t have kids? So what if it was going to cost too much? So what if I’d be only mildly amused? It felt like I had to go for the sheer weirdness of this mini mom and pop version of Disneyland. 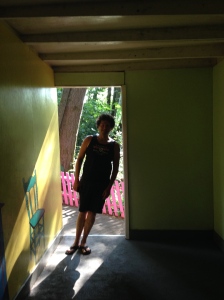 I dragged my partner along with me, who also had never been. And it did feel weird being there without kids and it did cost too much and I was only midly amused. But I’m still glad I went. We laughed (mostly at ourselves) throughout much of the park. We laughed at the voices of the Goldilocks bears. We laughed at how jumpy I got inside the dark halls of the haunted house. We laughed at how bad we were at shooting the targets on the Challenge of Mondor (though I thought how much more fun some of the rides at Disney would be if they incorporated target shooting). We felt our age and our height as we crammed ourselves into the bobsled roller coaster and were relieved to finish the day off with a soaking on the log flume.

It wasn’t until later that I read the history of the park and realized so much of it was created by the original owner, Roger Tofte. I love the idea of this man walking around on this densely forested and mossy hillside and against all reason building a crooked house, a giant shoe slide, and the iconic Humpty Dumpty. About a month ago Humpty literally had a great fall when some people tried to climb the statue and knocked it over. As we walked by, there was Roger Tofte, now 84 years old, bent into the work of building a new one.

Having had our fill of the park, we exited quickly and made a bee-line to where our friends live on a big chunk of land on the Willamette. Despite the many times I’ve been to their place, I’d never gone in the river. But it was a beautiful hot day, the water was warm(ish), and I could celebrate crossing another silly thing off my list of things to see.