When I first moved to Portland, the art walk/street fair/Portlandia skit come to life known as Last Thursday didn’t exist. Alberta Street was not “The Alberta Arts District.” Back then, the hipster bar was a Baptist church. The gift boutique was a boarded up store front. Slowly, artists started to move into the area (for a history of the street read this). I remember going to Alberta one night, this was probably in the late nineties, to see my friend’s studio and wander into a couple of other artist studios open for what must have been the beginnings of Last Thursday. The street felt run down and a little dangerous and, compared to the more established downtown galleries open on First Thursday, there wasn’t even much art going on. When I heard about “Last Thursday” in the years that followed, I was never compelled to go back. 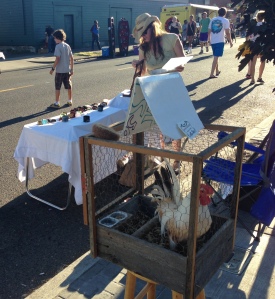 Fifteen blocks of Alberta Street are closed to traffic for the event. I’m always going to be in favor of that. I’m not going to be in favor of booth after booth of street fair art: hippie jewelry and handmade felt trinkets and bright psychedelic paintings of little children or monsters or Willie Nelson. In between this stuff was street fair food and food cart food and homemade, dished-out-of-a-crock-pot food, but I wasn’t hungry. So I dashed from one end to the other, pausing only long enough to note that on every other corner was what appeared to be the exact same band dressed in tattoos and stripes and playing some combo of accordion, kazoo, fiddle and acoustic guitar.

I walked south, away from the growing crowds to recoup and have a beer with an old friend. By the time I made my way back up to Alberta it was getting dark and the number of people filling the street had increased ten-fold. It was too crowded for me to walk quickly so I was forced to watch and listen a little more carefully. A fun funk band was playing in one of the food cart pods and I stopped to dance a little. A trio of bellydancers were holding court further down the street so I stopped to watch their hips. It was nice to see a more diverse crowd and I wished that I had a friend in tow who would sit and people watch with me from one of the bars along the way. But alas, no.

By the time I got back to my car, I was exhausted and cranky and lonely. My lesson? Don’t go to anymore street fairs, ever, even if they’re called “art walks.” And if, for some reason, you do end up at one, make sure you have a funny, sarcastic friend with you who will appreciate all the eye-rolling you’ll be doing.