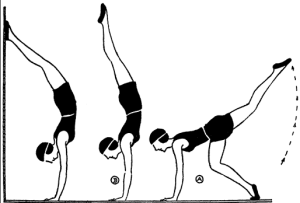 This essay was first published on this blog in April 2014.

I wanted. Again and then again. I wanted my body to make the shape their bodies made: Adho Mukha Vrksasana. Downward Facing Tree. Handstand. I watched from the back of the yoga studio as they flung themselves upside down against the wall or rose in the middle of the floor. Feet over knees over hips over shoulders. Breathing, buoyant pillars.

I tried to imitate. With palms pushed flat and hard to the floor, I peaked my hips. One leg straight. One leg bent and ready to spring. I pictured myself upside down. I pushed. But gravity, fear and doubt pushed back. My tree became a broken twig, a bunny hop, a hiccup.

Whatever. Handstands were for acrobats and athletes. I’d fall and get hurt. Inverting would only reveal the full weight of my 40-year old foolishness.

I started doing yoga, started jogging, started slamming awake at 4am every day at the same time that I started dating, started kissing, started having sex with people other than my long, bright love of seventeen years.

No marriage. No babies. No Jesus. Those were our only vows, our only dealbreakers. That’s all we asked of each other. That and please love me. And so we loved. But the love refused a standard shape. We said do what makes you happy and meant it. We said do what you want, and we did. He wanted, on occasion, to date other women. I wanted to stay at home, pinned with my Best Girlfriend Ever badge. I was lazy, a poor multitasker, a lover of books, not people. I wanted nothing more.

Of course, that was a lie. Of course, I wanted more.

Instead of fear, the yoga teacher said, approach the unknown with curiosity. Like the young child grabbing at one strange new thing after another. No fear, just wonder.

A year before the yoga/jogging/kissing/sex, my partner and a woman he’d been seeing, fell in love. They fell in love and then the three of us fell into bed together. For several months we felt smarter and wilder than anyone we knew. Then one day, the woman pulled her body away. And kept it away. Not from him, but from me. After that, every day fractured into two parts: the her body/his body part and the my body/his body part. Their love and our love.

In the space between those two parts, my want shook itself to the surface. And the woman’s wants diverged. Away from me, yes. Then away from our city. Then away from him.

Only our closest friends knew anything about our cracked and crooked hearts. His beat against the bruise of an absence. Mine beat against a wildness teased into my life then torn away. But he and I continued to lean into each other, those same hearts in synch despite their weird, untidy rhythms.

And with that, several layers of shy shook to the floor.

Preparatory positions are the body’s first entry into an unknown posture, the teacher said. The muscles meet new demands. The nerves learn new lessons. So eventually, when you do a handstand, your body will already know most of what a handstand is.

Then my want pushed to the surface and threw me into the world.

Tongue-shy, body-shy people forget that meeting someone new doesn’t cause instant death. My first date was with a man I met online who said he was polyamorous but, at the moment, only looking for friends. Good preparation, I thought. To my surprise, at the end of date one, I was still breathing. I went on date two. Date two was with a couple. I thought, if I lost my words, they’d make up for it with married banter. I didn’t think about two sets of eyes aimed at me, two sets of ears listening. And yet, remarkably, I lived.

Date three would have killed me the year before. Handsome, athletic, a traveler, a flirt. He said he’d use my years with my partner as evidence that open relationships could last. I explained how that openness was one-sided for a long, long time because I was very, very shy.

I don’t believe it, he said. You don’t seem shy.

A bright buzz shook me. Tongue, hands and heart. Tell me again, I thought. Tell me you don’t believe I’m the thing I’ve always been.

As the yoga students flung themselves upside down, maybe they saw me jogging by the large glass windows of the studio. Awkward. Obvious. As if the following facts were inked on my sweating back: (1) I meet, befriend and sometimes have sex with men who aren’t my partner. (2) Every meeting feels like a skydive. (3) Every morning I lie awake. All electric. All unsure. (4) All this and still my muscles burn with want.

My body wanted, and so I jogged every day. My mind wanted, so I took up yoga. After my jogs, I’d bend into an upside down “L” and try to find some calm. Half way to upside down, I’d imagine what I’d need to push all the way up.

We rarely surrender right away, the teacher said. Even when we know that relief and release sit on the other side of that struggle to keep control, we try one thing after another, every angle we can find, before finally giving up. But we can be both scared and brave. We can choose surrender instead of waiting until it’s the only option.

We placed our hands on the floor of the yoga studio a few feet away from the wall. The wall was no real use at that distance, only a suggestion of support. But I couldn’t go upside down at all. My legs wanted the ground, ball pressed to socket. My head wanted to stay high above it all, full of questions. Full of doubt.

Does bravery always follow fear or, sometimes, is there just more fear? Is the other side of surrender always full of relief or, sometimes, do you land hard? Do you break?

In the middle of winter, an upside down man arrived as a tiny photo on my phone. The photo showed a blue-skied beach marked by the lines of gray metal gym equipment. In the foreground sat a set of parallel bars. Attached to the bars and flung heels-over-head was the man. His shirt was off and his rock-climber back was aimed at the camera.

As you transition into the pose, the teacher said, observe how your muscles adjust. How your mind shifts. Then move into it. Find your new shape. Once the shape becomes familiar to the body, you’ll find it calms the mind.

I didn’t know the name of the shape I wanted. Neither did he, the man I started dating late that summer. What do I call you, he asked. My lover? I cringed at the word, but accepted that maybe it was the most appropriate one for our crushed-out connection.

I’d been struggling to do a handstand for nearly a year at that point. He didn’t understand. Of course you can do it, he said. It’s all mental.

He was right. My upper body was strong. The pose wasn’t that difficult once you were in it. It was the getting there that was hard.

You can totally do this, he said and threw himself upside down against his back door. Everything I needed was suddenly clear: Enthusiasm. Momentum. Abandon. Trust.

A few days later, he showed me a video he’d taken of himself doing this same thing. He seemed to stick upside down as if he could stay there for hours. If you do this, he said to the camera, you’ll be my superstar.

Someday you’ll see, my partner used to say when I laughed at the idea of ever stepping outside the calm safety and relative ease of our love. Someday sounded about right: Vague and unlikely. But someday turned out to be one day: Specific and real.

The day after I watched the handstand video, I waited until I was home alone then cleared a spot in the kitchen, forcing my quickening breath back into a slower rhythm. I pressed my palms into the floor, angled my hips and kicked. The first kick was good, but my legs only hovered at a low angle before returning to the ground. Before my muscles settled, I pushed again. Without worry. Without care. I trusted that the wall was there to catch me and that my body could hold the shape.

My legs pendulumed into place. My bare feet tapped the cool wall.

Blood rushed to my face and a laugh fell from my stomach and out my wide-smiling mouth. The familiar lines of my kitchen barely registered in their new, confused state. I was inverted for less than 10 seconds, but when I folded back down everything shifted into place – joint and tendon, organ and vein – except now I felt better-fitted, as if I’d kicked out the twists in some tangled sheets.

Superstars knew how to be in their bodies rather than wear them like a bad disguise. They knew how to step into the unpredictable buzz of the world and not turn on their heels and run.

That night, drinks drunk, dates done, I climbed into bed and curled along my partner’s back the same way I had for years. In the morning, we smiled at each other over the eggs he made and the coffee I brewed. Oh, our funny little life, he said and stretched across the table for a kiss.

My breath loosened. My limbs relaxed. My heart flipped upside down.

Tracy Burkholder is a writer living in Portland, OR. Her debut book, I Want More is a lyric hybrid of memoir, poetry and image published by Summerbear Press. Available here.

One thought on “an unknown shape”