In September, 2016 I started a year-long personal challenge of doing something each week that I’d never done before then writing about it. This is week 40/41.

Three nights and four days in the wide eastern stretches of Oregon is too big for one post. Because I’ve never been east of Bend, let alone 250 miles east and south of it. Because I’ve never spent that amount of uninterrupted time with Dave, who I’ve never camped with before. And because I haven’t camped for more than one night in ages.

What I imagined/craved was us sitting together in the wide space of night and turning our awe-struck eyes toward an inconceivably vast body of stars. We’d lie in a tangle of dusty, tent-dappled limbs and I’d ask all the best questions. For every true and charming story he told, he’d offer a true and heartbreaking one. We’d have one ridiculous car sing-a-long each day. And my words would open clear and easy the way my heart has over and over.

What I feared was too much uncomfortable silence and too much distracted banter. Too much fuss and too much company as well as too little. I feared scratchy legs and achey joints and all that desert brown. 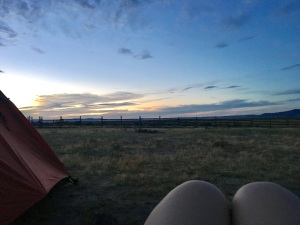 Having failed to tamp down both my hesitations and expectations, Dave and I set out on a Sunday afternoon, driving over Mt. Hood down to Prineville and then east to a spot outside of Burns called Crystal Crane Hot Springs. It didn’t even seem like that long a drive despite the fact that each hour had it’s own earthy shade: deep green to spotted green to brown to sage. The punctuation of cows and hay. And hay. And the makings of hay.

That night looks sweet and easy now, despite the fact that the wind was blowing so hard I had to have Dave get up and take the fly off the tent so I didn’t feel like I was in the middle of a hurricane. That night also had a dozen new bird sounds, an unbelievable sunset over a neighboring pond, and a swim in a hot, deep mineral pool under the densest night sky I’d seen in a long time.

After a relaxed morning of good coffee and sage-scented air, I got behind the wheel and steered us south along the snowy-tipped rise of Steens Mountain and the neighboring plateaus and hills. Everything was accented with cloud shadows and a palpable lack of humans. We landed at the tiny outpost of Alvord Hot Springs and got a more-than-thorough run down of the privately owned area we would camp on that night and the privately-owned hot spring pool we would soak in.

Did you know the desert, even if it’s not a real desert but an ancient dried up lake, is a bright, hot and harsh environment? Of course it is, but as I’d never camped in such conditions I was unprepared for the sauna-like qualities of our tent and the fact that the wind would be as uninterrupted as the cracked white earth of the lakebed. After finally giving up on waiting for one, just one, of the many clouds in the sky to conquer the sun, we headed to a tiny creek up the road and settled into a shady crevice of cool water and buggy splendor. I achieved the bliss of boredom that afternoon. 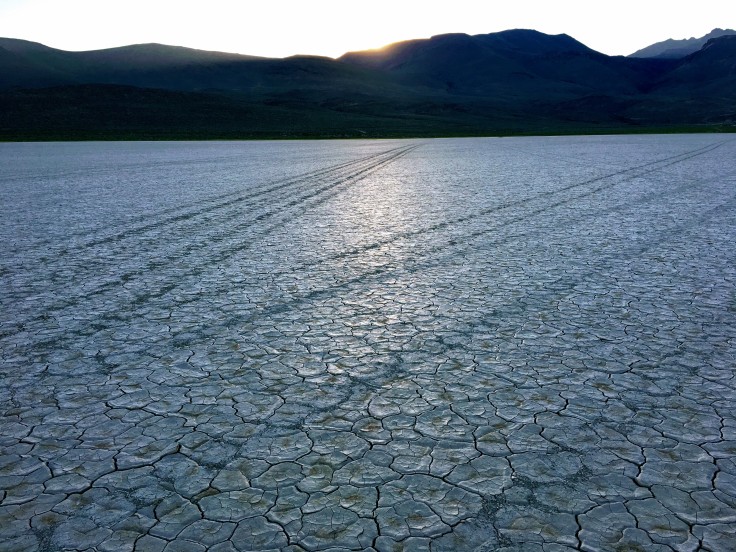 Later, when the sun finally backed down, we raced the top of the mountain’s shadow out across the lakebed, but couldn’t catch it. We consoled ourselves with a soak in the hot springs as a dust storm swirled out on the horizon. Back in our wind-bent tent, we collapsed from our long day of nothing and tried to adjust to the sound of coyotes and cows and the sight of distant lightening flashes.

I woke up to more sky than I’d ever seen, even the night before. Reluctantly, I pulled myself from sleep and stood, half-naked, out on the cracked, chalky ground and tried to take it all in while Dave clung to his sleep. The Milky Way stretched overhead in its entirety, not in the flashy colors that photographers put on it, but in a soft brush of white light. Deep breath. Deep sigh. All our brilliant nothingness in one glorious sweep. All our brilliant everything.

Despite this gift and the gift of good sleep, the next day of driving started to feel long. We made it around all the varied rocks and ranches on the west side of Steen Mt. and up to John Day. More driving took us through the small towns along the John Day River and out to a BLM camping spot called Priest Hole (it’s a thing, look it up!). Warm, swift water and red rocky cliffs. But also inconsiderate campers and the wear of being always within a few feet of a companion and the sudden unstoppable weepiness of PMS.

At night, I again forced myself out from under the warmth of the tent, convincing Dave to come with me. My tears which had paused, started again at the sight of the deep, wide sky. Dave sat beside me, sleepy and distracted.

Here is the lesson I learn/forget over and over. Awe doesn’t share, it strikes. And if someone isn’t struck as hard as I am, for whatever reason, then so be it. That doesn’t mean I can’t have my own undiminished moment. Unfortunately, I forgot that lesson that night and let it scratch at me into the next day. 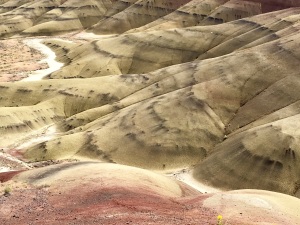 In the morning, we stopped at the striped, fleshy curves of the Painted Hills before pointing ourselves toward Portland. I was thoroughly homesick by then, unable to enjoy the silence between us and unable to stop my tears and vague nausea. My body wasn’t getting what it wanted (a couch to lie on and dumb tv to watch) and my brain was too tired to stop catastrophizing.

I didn’t realize until long after I got home that what my brain and body had really wanted all day was to hear and feel I love you. I didn’t fully understand until I wrote this, that this whole trip was saying I love you from beginning to end. Love in sharing a simple camp meal and floating in dark pools and talking about writing. Love in simply setting aside time to be together across 854 miles. But love also in the permission given to let our bodies and minds be turbulent, messy and unresolved. Like the roiling stars. Like the slowly shifting land. Like the hot, sulphurous water bubbling up.