If my last trip was about sky, space and love, then the trip I just finished was about water, light and love. This week I turned south instead of east and rolled through almost 800 miles to Ashland, OR and back, Sean and I working our way through a series of new adventures.

First, there was water winding through trees. The swift, icy blue of the McKenzie river wrapped in lush moss ran through our campsite and along our hike between Sahalie Falls and Koosah Falls. It’s a blue that makes me thirsty the way no other water does. The light through the trees and moss is a light that makes me giddy like no other light.

Next there was water circled by forest on one side, lava rock on the other. The water of Clear Lake shifts between turquoise and sapphire. It was Sean’s turn to be giddy by taking the oars of a little metal boat and rowing us around the lake for an hour. Then we circled the lake on foot for a perfect five-mile hike through soft woods and sharp rock, constantly pointing out toward the unbelievable clarity and color of the water. At the end of the day, our tired legs stretched toward the fire as I read and he played his bass, as he ate and I drank and we talked and talked.

The next day we drove to water held by retailers and wealthy residents. It was nice to get in the slightly chilly Deschutes and actually get wet after a couple days of looking at water that froze your ankles in under a minute.  A float down the middle of Bend on some rented inner tubes was fun, especially the mild descent over some carefully constructed “rapids” but the dozens of unruly families and chatty bros and babes along with the views of Red Robin and The Gap made the whole venture feel like a trip to the mall. We were happy to get to our crappy hotel and shower so we could pick up Sean’s dad for dinner, then pick him up for breakfast the next morning and get the hell outta there.

The next water we aimed ourselves at was the wide, unreal cup of Crater Lake. This had been the main attraction when I first started planning this trip, seeing as how I’d never been in all the years I’ve lived in Oregon. As the road climbed, the snow got thicker, and we discovered that parts of the route around the rim of the lake were still cut off from cars. We picnicked with the unfiltered blue of the water and white-tipped peaks in front of us then continued along the dusty, construction-ridden path. Too many loud tourists, too much choking dirt and a lack of space to simply sit and admire that strange solid blue pushed us out the southern end of the park after only a couple hours. 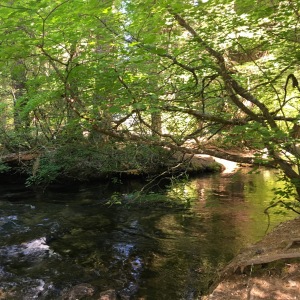 I grew softer and happier as the trees came back into view, my favorite dappled light sparkling along the empty road to our last campsite on the Rogue River and it’s tiny offshoot of Union Creek. It was a beautiful campground tucked beneath some mighty trees, but I was struck by how odd it is to travel so many miles from home, deep into the woods just to set up camp within earshot of several loud families. I’m not hearty enough to backpack into more remote and quieter areas, so I reluctantly tolerate this phenomena every time I camp. I just makes me listen harder to the grumble of crows and the rush of river and wind. 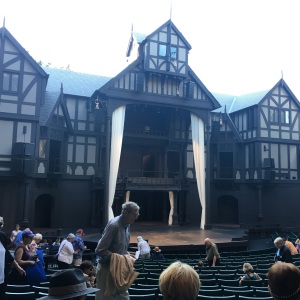 By the time we’d crammed our unruly gear back into the car and rolled into Ashland for the last night of our trip, we were dusty and stinky and ready for hot showers and soft beds overflowing with pillows. We came to see a production at the Oregon Shakespeare Festival, yet another of those Oregon attractions I’d never bothered to seek out. We didn’t see Shakespeare, but a clever and fun production of The Odyssey, which was especially relevant to Sean who teaches The Odyssey to his students. It was a calm, civilized way to end our trip, in an outdoor theater tucked in next to a sweet, city river on a warm summer night.

Even though we hauled it as fast as we could back to Portland to reunite with our beloved cats and beloved city, it was satisfying to explore some of the big unknowns of my state. It was even more rewarding to spend so many uninterrupted hours with a man I love, curled into each other against the cool night air, walking beside each other under the hot sun, slipping through and into and along all the bright water.