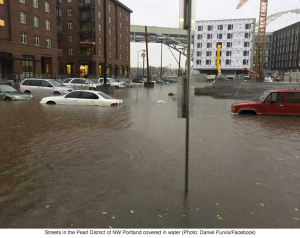 It’s 2016, March already and for some reason I was compelled back here today after many months away. Part of it is my own completion complex, that thing in me that makes me clean my plate and read a book to the end that I don’t really like. It’s not a very useful impulse, but it’s there and it was nagging me to report on why my year of monthly challenges stopped at month eleven.

December was going to be a month of giving: Give money to a charity I believed in. Give compliments to those not expecting them. Give attention to the people and places that had been overlooked. Buy a friend dinner. Help a friend move.

I did some of those things, sure, but December turned out to be a tough month and most of what I had to give went into my work and to my handful of closest relationships. It’s cliche to complain about the rain in Portland, but even after twenty-two years here, the 25 straight days of rain this past December crumpled me a bit. Wettest December on record.

The gray didn’t make me sad, but it sucked all the motivation out of me to do much more than sit on my couch wrapped in a blanket. Yeah, that sounds sad, doesn’t it? Ok, maybe it was a little sad. But at least I was not alone in my need to be mostly alone. When I finally got out to a reading one night at the beginning of February, I ran into a friend who announced that it was the first thing she’d been out to since Thanksgiving. I smiled and told her the exact same thing was true of me.

So December’s month of giving turned into giving myself a break. My year of challenges didn’t need to end on some spectacular note. I didn’t so much as give myself permission to let it peter out as I simply ran out of fucks, as they say.

Meanwhile, the trees are turning pink here now. My monthly challenges are over. I’m off the couch and working on finishing a book.

Thank you, as always, for reading.