In September, 2016 I started a year-long personal challenge of doing something each week that I’d never done before then writing about it. This is week 14. 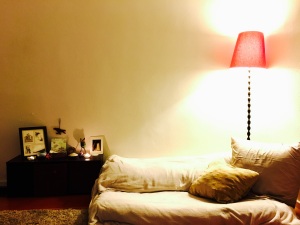 Sometimes taking a deep breath and jumping in is the best way. The shock is part of the fun: the way the body grabs itself from the inside as the cold hits. The way the voice can’t resist a scream as soon as the lips break the waterline. You are safe and sunsoaked and dry and then, a second later, you are the exact opposite.

Sometimes everything has to be just right; the angle of the sun, the wind dying down, the slope of the ledge. Toe then shin then thigh. Pause at the junk line. Pause again at the navel. When the bottom curve of breast is about to submerge, then toe, shin and thigh pull the rest in. They’ve been in it for a while and already know how soft, light and easy it can be.

My personal office space, which has always been one of my writing spaces (and is now also where I do yoga, meditate and break out in occasional fits of dancing), has always been a jump in and get it over with quick kind of affair. In other words, there’s been very little room for subtlety, beauty or savoring the immersion. My desk has been in a corner of one tiny bedroom and then another, even tinier bedroom. It’s sat opposite the dining room table, overlooking the living room. The last time it had its own room, it still shared space with a hulking eliptical machine and other junk with nowhere else to go.

I know I can find the right mindset for writing in these less-than-ideal spaces because I’ve written in all of them. But I’ve always felt that it was despite the atmosphere rather than in conjunction with it. I’ve had my own private work space for some time now, but I never bothered to set it up in any purposeful way. A few weeks ago, I got some of the art I owned up on the wall, but there were still piles of papers and junk all over my desk. The futon was a mess in the opposite corner. There was barely enough space to roll out my yoga mat.

A couple weeks ago, I came back from my massage workshop, feeling more dedicated to being deliberate and thoughtful. During the workshop, there had been a very informal altar in the corner that we were invited to leave something on for however long we’d like. I’ve never been an altar/shrine person (if you don’t count the ironic John Travolta shrine I kept back in the early 90’s). Anything that came too close to feeling religious, spiritual or magical turned me sour. At the same time, I’ve always collected reminders, either photos, letters, objects or art. They are things I keep on display, here and there around my house, gathering dust as my ability to actually still see them fades.

But today, I cleaned my space. I gathered the futon into a more reasonable shape. I cleaned off my desk until it held only the essentials. And finally, I built my first real altar from old photos, new presents, postcards and sculptures. I lit a couple tealights. I didn’t dwell there in front of it, forcing some kind of  contemplative state. I just let it be there, clean and beautiful as I moved in and out of the room.

Now each time I enter, it will be my reminder to pause. My permission to be soft and unknowing. No need to toss myself into the water (of writing, meditation, yoga, or even solo disco dancing), all tense and guarded. Instead, I can move slowly and with gratitude, taking in scent and color, curve and texture. Feeling the bend of my spine as I tip toward the flame.