In September, 2016 I started a year-long personal challenge of doing something each week that I’d never done before then writing about it. This is week 21. 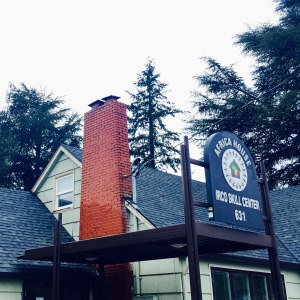 On a morning when the air was barely warm enough to keep the rain as rain, I drove to an unassuming building on a busy commercial street near I-205. I’d been warned that doing massage at Africa House, part of the Immigrant & Refugee Community Organization (IRCO), was going to be unpredictable and I needed to be flexible. This is the kind of warning I always wave off by saying no worries. But no, worries. How difficult was the language barrier going to be? What if they put me in a crowded corner and I was in everyone’s way? What if more people wanted my services than I could see or what if none of them wanted to see me at all?

The chaos was clear right out of the gate, but it was a cheery chaos. My liason, Lisa, quickly negotiated a space for me to work by emptying out a meeting room then led me toward the back of the building. A large group, mostly women, were seated around a huge conference table as if waiting restlessly for some strange kind of board meeting to start. Knitting yarn, oranges and jugs of milk were passed around. One bold, smiling toddler moved from woman to woman with an outstretched arms, working the noisy room.

Lisa got everyone’s attention, made a squeezing motion in the air with her hands then waved my sign up sheet over her head. “Who wants a massage?” It was not the first time a massage volunteer had been there and so several hands shot up immediately. Lisa filled the list with names, none of which I’d ever known as names before.

My first client was from Liberia and I was told that she would understand me perfectly but I shouldn’t expect to always understand her in return since her accent was so different from mine. I won’t deny that it was a hurdle. I’m the kind of person who turns on the closed captioning for movies set in England and Ireland, so Liberian English was really beyond me. And yet, we managed.

I also managed with the muslim man who pointed at his injured elbow. I managed with the woman who lowered her head to expose the back of her neck and the two older women who both lifted their long skirts to expose their aching knees. My palms pressed, my fingers kneaded. I tried to listen with heart and skin.

I was under no delusion. Fifteen minutes of massage in an office chair under fluorescent lights and surrounded by the noise of a repairman outside the door was never going to be great or profound. But I reminded myself that it could still be something: a moment of relief. A break from routine. A brief chance to relax, or feel or connect. It could be one small thing. One and then another, accumulating. Sometimes, that’s all we have. Sometimes it’s enough.